The ASTM F1820 standard specifies different test methods for determining the forces for disassembly between the acetabular shell and liner.

The test methods specified in ASTM F1820 can be used to determine the mechanical stability between the acetabular shell and liner or inserts, and various insert locking mechanisms can be compared. 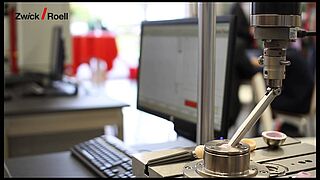 We look for and find the optimal testing solution for every one of your requirements.

We look forward to discussing your needs.

ISO 7206-10
ISO 7206-10 specifies the requirements on the testing system for the determination of resistance to static load of modular femoral heads.
to Compression/pull-off test femoral head

ISO 7206-13
ISO 7206-13 specifies a test method for the determination of resistance to torque between the femoral head and neck, or the stem.
to Torsion test femoral head

ASTM F2009
The ASTM F2009 standard specifies a test method for determining the required disassembly force of the taper connection between the femoral head and femoral shaft.
to Tensile test femoral head