A drop weight tester for impact testing with an installation height of approximately 9 meters, a weight of significantly more than 10 tons, and a drop energy of 120,000 joules was delivered to the Essen-based testing laboratory Gövert, by ZwickRoell. In the future, tests will be performed on various pipe wall specimens on the customer’s behalf using the drop weight tester.

ZwickRoell DWT high-energy drop weight testers are used to test and evaluate the fracture surfaces of ferritic steels; for instance, they are often used for oil and gas pipelines. The test method is described as a drop weight test in the following standards: API-RP 5L3, DIN EN 10274 and ASTM E436. During the drop, the weight accelerates a standardized test piece in the direction of the specimen that is being penetrated or broken. The type of break as well as the break structure of the specimen allow conclusions to be drawn about the material properties. The specimen can also optionally be tempered with a separate cooling unit.

During specimen preparation, pipe sections are cut to size, brought into gull wing form, and provided a notch on a ZwickRoell 800 kN hydraulic notching press. Gövert is one of the few service providers that manufactures gull wing specimens and can now test them as well. With gull wing specimens, the original curvature at the notch and test point remain unchanged, while conventional specimens are tested as flat specimens with a notch.

What is particularly impressive about the high-energy drop weight tester from ZwickRoell is its delivery of reliable test results that are verifiable with a test certificate according to DAkkS requirements, as well as the certified calibration provided from the factory and at the customer site. Also, the ability to verify the fulfillment of the strict safety requirements along with the extensive support provided during project implementation were significant contributing factors for Gövert’s decision to opt for the DWT 120 kJ from ZwickRoell. 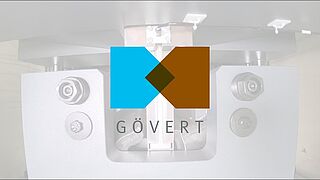