A vibrophore is a resonance testing machine that uses a mechanical resonator in connection with an electromagnetic drive. The dynamic load is generated by an oscillation system that works when the system operates at full resonance. The mean force is applied by moving the upper crosshead with the lead screw drive.

In the past, resonance testing systems and resonance testing machines were limited to dynamic materials testing (i.e. the determination of fatigue strength). With the newest generation of the vibrophore series high-frequency pulsators, you can perform static tests at test forces up to 1,000 kN. The electromagnetic drive of a vibrophore delivers large force amplitudes with low energy input, so they work more efficiently than conventional instruments.

Typical applications for resonance testing systems are material fatigue tests and durability tests on standardized specimens and components (for example, piston rods, crankshafts, and screws), and production and quality control of components exposed to dynamic loads during their service life, such as concrete and reinforcing steel, as well as quasi-static tensile and compression tests and fracture mechanics tests on CT and SEB specimens.

The vibrophore series of resonance testing machines can be used for fatigue tests on threaded fasteners. 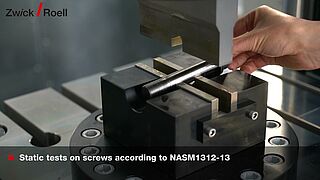 Two in One - the Advantages

Materials and components may fail prematurely under oscillating loads. For this reason, the behavior of materials under alternating mechanical loading is an important decision criterion,

The operating principle of the ZwickRoell Vibrophore is based on the concept of a mechanical resonator with electromagnetic drive. The mean force is applied by moving the upper crosshead with the lead screw drive. The dynamic load is generated by an oscillation system that works when the system operates at full resonance. In this way test frequencies of up to 285Hz are possible, provided the specimens are sufficiently stiff. The dynamic and static drives are controlled separately, so that stress ratios (R-ratios) of any kind are possible. Tests can be force-, displacement- or strain-controlled.

Mechanical clamping of the oscillating crosshead and the implementation of the testXpert III testing software transform the Vibrophore into a true static materials testing machine.

Generous connecting surfaces and robust components ensure high machine stiffness. In combination with precision crosshead guidance, the Vibrophore minimizes unacceptable mechanical influences on the specimen. By using suitable accessories, both static and dynamic tests can be performed under various environmental conditions (temperature, aggressive media). The Vibrophore can also be configured for torsion and flexure tests. The absence of a central lead screw enables test area variability to be maximized on the new Vibrophore,which makes it possible to test very short specimens as well as large components.

Do you have any questions regarding our products?

Please feel free to contact our product experts.
We look forward to discussing your needs.

The University of Gabrovo performs fatigue tests on structural components made of high-strength aluminum alloys, mild steel and bronze. During a new project, our Vibrophore 100 was used for research purposes.

A vibrophore is an oscillation system that uses a mechanical resonator in connection with an electromagnetic drive. Vibrophores can be used to apply a dynamic load on material specimens.

Vibrophores are used on drive chains, crankshafts, piston rods and timing chains in vehicle motors, on turbine blades or concrete and reinforcing steel.

ZwickRoell vibrophores are available in eight models for resonance fatigue tests up to 1,000 kN. The extremely stiff load frame consists of four columns to achieve excellence in guide qualities. Mechanical clamping of the oscillating crosshead and the implementation of the testXpert III testing software transform the Vibrophore into a true static materials testing machine.